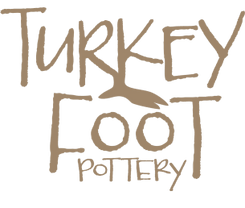 Signing "the Foot" of a pot

I used to just sketch R. Smart on the bottom of my pots "the foot" -- but wanted something unique and fun.

The name goes along with the fact that the bottom of a pot is called a foot and our family has a tradition of giving out a Turkey Foot Award.

WHAT IS A TURKEY FOOT AWARD

A family tradition on my husband's side of the family - The Benedicts of Camillus, NY (Grampa Bob Benedict).

History of the Turkey Foot Award

written by Dorothy Benedict in 2020 (daughter of Robert Benedict)

Robert Benedict was a dump picker. When he took garbage to the dump, he sometimes would bring  back a treasure and sometimes other trash.  One day, he brought home a yellow plastic turkey foot.  We laughed and wondered what to do with it and decided it could be an award given -- to keep one humble -- to a member of the Benedict family for a special accomplishment.

For years, it remained a yellow plastic foot. But, finally it was bronzed and mounted on a plaque and was given to the recipient to hold until the next person was chosen for the award.

The first award was given to Jeanne O'Hara, granddaughter of Robert, for the beautifully decorated Easter Bunny cake she made in 1974.

Many members of the Benedict family, which includes members of the Smart, O'Hara and Sgarlata clans, have received many awards along the way for 46 years.

- Thank you Aunt Dorothy (Aunt Dodo, Aunt Nobody, Aunt Somebody) for contributing this information.